I’m still going strong with my gallon of water “challenge”. After a couple of weeks of drinking “the right amount” of water, I noticed a few things.

I kind of knew this was coming because other people who have posted about drinking a gallon daily had mentioned it. Drinking that much water in a day (every day) cleanses you and removes a lot of toxins from your body. Removing toxins is a tricky thing in that it makes the toxins rise to the surface before they can be removed. It’s the same concept as using a new facial cleanser; it gets worse before it gets better. So I had maybe three or four small pimples in those first couple of weeks and they all cleared up within a few days.

I only wanted water

You would think that I would get sick of the taste of water after the novelty wore off but NO! END_OF_DOCUMENT_TOKEN_TO_BE_REPLACED

Last weekend I freaked out because I thought I had crows feet. Well, it turns out that I really just have smile lines so… no big deal. But it really made me decide to get serious about this whole anti-aging kick. It’s something that has been on my mind since I left Las Vegas, but now I’ve decided to take action. Instead of reaching for expensive anti-aging beauty products (my mom and grandmother believe they are a waste of money and that your skin eventually becomes dependent on them), I decided to use Gabrielle Union’s anti-aging “secret”… WATER. 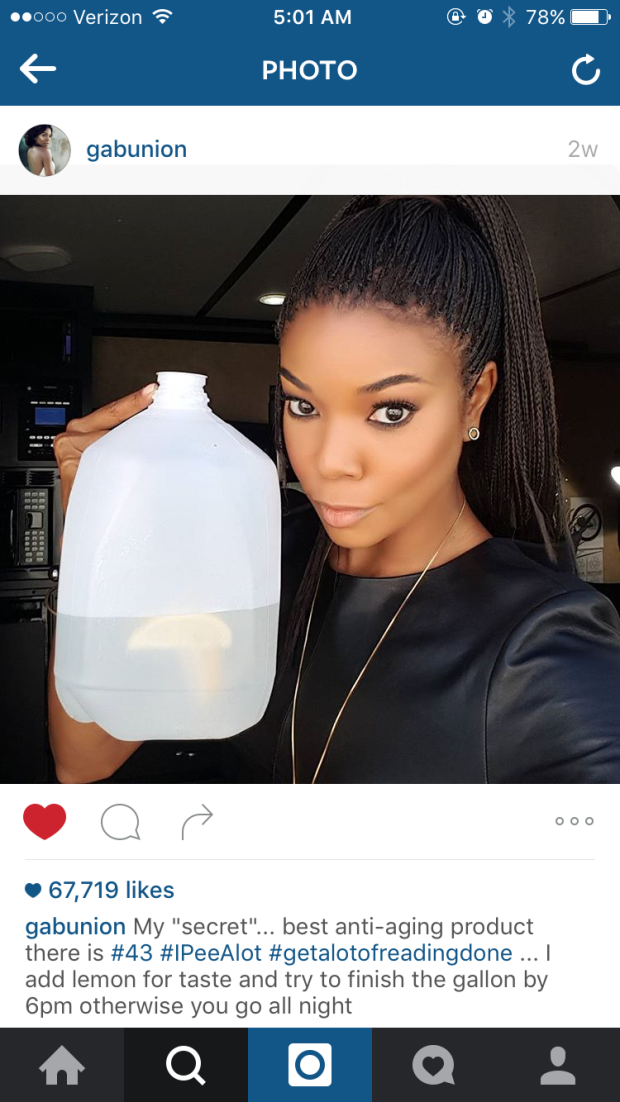 One gallon of water everyday. It seems easy enough. I sit at a desk for most of the day so I really have no reason to not be able to do this. I bought a gallon of drinking water at the grocery store because seeing how much water I have to drink in front of me helps me. I can’t just carry one small water bottle and keep refilling it throughout the day. The first day was pretty chill until after lunch when I felt like the water in my jug was rising instead of getting lower. END_OF_DOCUMENT_TOKEN_TO_BE_REPLACED